VoterMarch was founded on November 14, 2000, by Louis Posner and Chris Acosta from New York City, and Bob Rogers and Les Souci from Washington, D.C., to organize American voters who wanted to express their opposition to the recount irregularities of the 2000 presidential election. Louis Posner was the National Chairperson. As an Internet-based, not-for-profit grassroots group, VoterMarch fought for voter rights, electoral reform and a progressive agenda. By early 2001, VoterMarch had built an online community of activist members, with more than 60 state and local chapters, and over 10,000 individuals enrolled in VoterMarch email lists and egroups.[See, VoterMarch Archives, Press Release on Voter March Grassroots Group, April 15, 2001] VoterMarch is headquartered in New York City and included affiliate chapters VoterMarch DC, Seattle VoterMarch, and Voter West.

On January 20, 2001, counter-inaugural demonstrations in Washington, D.C. against President George W. Bush, were organized by the
International Action Center at the inauguration parade route, the Rev. Al Sharpton at the U.S. Supreme Court, and by VoterMarch at Dupont Circle. The Washington Post reported further that: "Other activists are planning a Voters March to call for election reform and the abolishment of the electoral college. "Our nation has been traumatized by what has happened in this election," said Louis Posner, a New York attorney leading the effort." [See, Inaugural Protests Take Shape Published on Thursday, December 21, 2000 in the Washington Post, by David Montgomery and Arthur Santana, Common Dreams] 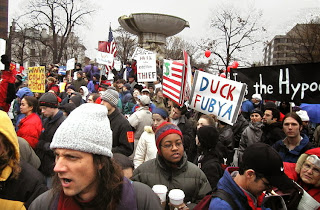 Insight on the News reported "We were formed as a grass-roots organization in response to election irregularities and problems," says Posner. Voter March played a key role in organizing the main protest rally on Inauguration Day, acting as an umbrella organization for hundreds of smaller groups from across the country. They started at 10 a.m. with a rally at Dupont Circle in Northwest Washington before heading through the city on a three-mile march. Posner claimed his group is more mainstream than many of the others in his penumbra, but assured in the days leading up to the inauguration that marchers would be peaceful. "We're taking a pretty strong position that everything we're going to do is going to be legal and lawful," Posner told Insight...This sort of thing may help explain why groups such as Voter March made such an effort to distance themselves from the more experienced troupes of protesters. "Our group does not represent the `professional' protesters that you saw at the World Trade Organization [and] World Bank [meetings] and Republican convention," Posner tells Insight." [See, Rent-a-Mobs Descend on D.C, Insight on the News, 2001]

BBC reported "There are a lot of moderate-thinking Americans out there wondering how we got to this point - not only why Bush is president, but why his cabinet nominations are so far to the right," said Bob Rogers of the group Voter March. Voter March is part of a coalition of groups, including the National Organization of Women and the National Action Network, that have called for Saturday to be a non-violent 'Day of Resistance' to the presidency of Mr Bush." [See, Bush: Who's Protesting and Why, BBC News, January 20, 2001]

The Philadelphia Inquirer reported "Bush may be president, but I know that when he goes to sit in the Oval Office for the first time, he's going to look out the window, and see and hear us," said Bob Rogers, a founder and organizer of yesterday's Voter March, a nonpartisan group protesting voter disenfranchisement and championing reforms to the Electoral College. "I don't want to personalize this," Rogers said of Bush. "I'm not going to scream 'Hail to the thief,' as others may do. But I will say, 'Respect the presidency,' because during this election, it was not respected." [See, Inauguration Protests Largest Since Nixon in 1973 Published on Sunday, January 21, 2001 in the Philadelphia Inquirer, Common Dreams, by Angela Couloumbis] 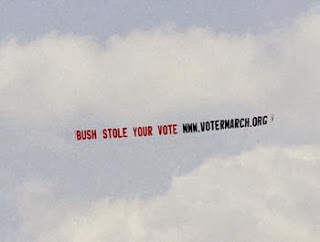 The Associated Press reported "Bob Rogers one of the organizers of the "Voter March" said the fact that Bush captured the White House even though Al Gore won the popular vote by 500,000 votes guarantied busloads of demonstrators. "These are moderate working people, motivated by anger, embarrassment, that kind of sentiment," he said. "They're wondering we can put a man on the moon and why can't we count the vote?" [Thousands Take to Street to Protest, Daily News, Bowling Green, AP, Jan. 2001] [See, Inauguration Protests Largest Since Nixon, The Victoria Advocate , January 21, 2001] [See, Thousands Take to Street in Protest of Inauguration, The Southeast Missourian, January 21, 2001] [See, Gore Returns to Private Life, The Tuscaloosa News, AP, January 21, 2001] 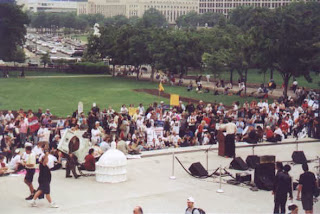 CNN reported "Election reform advocates planned to rally in Washington, D.C., and San Francisco, California, to push for changes in the nation's voting system and a "full investigation" of the 2000 presidential election.... Saturday's demonstrations are organized by Voter March, the same group that brought thousands to Washington to protest Bush's inauguration in January. District police said at the time that the size of the demonstration rivaled those held at the Nixon inaugural in 1973. Voter March founder Louis Posner said that he expected a diverse crowd at Saturday's rally -- "male, female, old, young, black, white, many of the 'first-time' protesters," he said. Voter March seeks a reform of the election process—including possibly scrapping the Electoral College system that allowed Bush to prevail. "The indignation over the Supreme Court's highly partisan decision cuts across all social lines," Posner said. "Voter March continues to grow as more and more people commit their energies to ensuring that the rights of voters can never again be trampled." [See, Voters Rally for Electoral Reform, CNN Politics, May 19, 2001]

The Democrat Underground reported: "The Voter Rights March to Restore Democracy had several specific purposes behind its inception: to bring attention to the fact that the November election was a catastrophe and that election reform is a moral American imperative, to point out that some 180,000 votes have yet to be recounted in Florida despite a requirement for same inked into the books of the Sunshine State's laws, to cast a glaring light upon the scurrilous actions taken by the United States Supreme Court on December 13, 2000.... We heard from Lou Posner, one of the central organizers of the march, who looked like a blue-suited roadie for Crosby, Stills & Nash, but had the eyes of an assassin with his mark in the gunsight. We heard from Bob Kuntz of OralMajorityOnline.com, who declared his candidacy for the governorship of Florida and delineated all the reasons why Jeb Bush had to go. We heard from a woman who had been an observer during the recount, and she bore witness to the mob action and calumny that motivated this march...Soon enough, the moment arrived. The signs and banners were hoisted, and the crowd formed into a long column as we began our march to the Capitol steps. I took a spot at the vanguard, just behind the main Voters Rights March banner and next to an elderly group bearing a loud sign that read, "WWII Veterans Against Bush." An older woman with a bullhorn became the chant leader; she looked and sounded like a union organizer with many marches under her belt. In front of us all, a man bore a huge American flag, and another man made sure that none of us marched in front of it. The flag was to be first." [See, A Report form the Voter Rights March M19 Democratic Underground, May 22, 2001, by William Rivers Pitt]

As part of the May 19 events, VoterMarch presented a platform calling for a Voters' Bill of Rights that included:

* Strict enforcement and extension of the Voting Rights Act, to prevent the disenfranchisement of voters, and full investigation and prosecution of offenders;
* User- friendly voting, requiring funding to replace old and unreliable machines to ensure that every vote is counted fairly and accurately, and monitoring of electronic voting;
* Establishment of real campaign finance reform and restrict the use of "soft" money campaign contributions;
Abolishment of the Electoral College and its replacement with a majority rule election, or substantial reform of the electoral system to allow for proportional representation;
* Increasing voter participation in elections by eliminating bureaucratic hurdles, registering citizens to vote and reducing the voter apathy that results in half of the eligible population not voting. 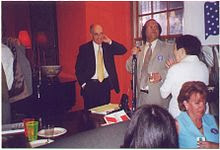 Protests Against the Iraq War

During the 2004 presidential election, VoterMarch protested against irregularities in voting and in the use of suspect computerized voting systems and machines.[See, Stolen Election 2004 Blog]

VoterMarch has continued its voter rights campaigns in 2012 with the Tax Wall Street educational blog and in joining Greg Palast's Billionaires and Ballot Bandits Action Groups.