Academy Award for Best Documentary: Our Pick: If A Tree Falls

Time Magazine chose "The Protester" as Time Person of The Year. A historical perspective of the protester was given, up to the more current developments in Egypt and Tunisia, to the Indignados in Spain to the Occupy Wall Street movement that spread from New York City to every city in the United States and throughout the world. 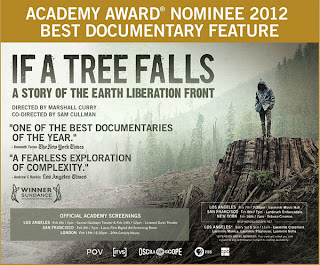 We believe that this year's winner of Best Documentary will be the film that has as its central focus, The Protester: "If A Tree Falls: A Story of the Earth Liberation Front," by Director Marshall Curry and Co-Director, Sam Cullman.

The title "IF A Tree Falls" has a double meaning. On the one hand, we see the pictures of beautiful trees from ancient forests being cut down by lumber companies. On the other hand, we also see how environmental protesters experience the adage "if a tree falls in the woods and no one is around to hear it, does it make a sound?"

We see how the protester's despair and disillusionment with their nonviolent direct action lead to the Earth Liberation Front, a radical splinter group from Earth First. The film depicts the human side of the protesters as they evolve from idealistic environmentalists to skilled arsonists causing millions of dollars of property damage. We are reminded of the aphorism "One man's terrorist is another man's freedom fighter.”

At the same time, the film achieves its purpose as a well balanced documentary by giving equal time to the viewpoints of the owners of the lumber companies who were targeted by the environmental activists, as well as law enforcement who vigorously pursued the arsonists. We gained firsthand insight into the methods that law enforcement uses to turn criminals into informants and to coerce plea deals.

Finally, we see how the environmental protesters are branded "Eco-terrorists" and subjected to enhanced prison sentences. While they undeniably committed criminal acts of arson and tremendous property damage, we are left wondering whether these protesters are really "terrorists."

"If a Tree Falls: A Story of the Earth Liberation Front" is our choice and prediction for an Academy Award for Best Documentary Feature for 2012, because it is a social justice film that documents the lessons of history, as we grapple with the current developments of The Protester.
Posted by Louis Posner at 5:55 AM